Located on the sparkling shores of Georgian Bay, the Town is home to bountiful opportunities for boating, fishing and the exploration of the local waters. Serving as home to the Beaver River, the Town is also home to the Thornbury Dam and Fishway. Learn more about the Town's Fishway and fishing opportunities by reviewing the information below.

On this page:
1. Thornbury Fishway
2. Fishing in The Blue Mountains

The Thornbury Fishway, located in downtown Thornbury near the mouth of the Beaver River (between Mill Street and Bruce Street), is operated by the Ontario Ministry of Natural Resources. This natural passageway for migrating Rainbow Trout and Chinook Salmon looking to spawn in spring and fall attracts visitors and anglers to The Blue Mountains. For more information, please review the frequently asked questions below. 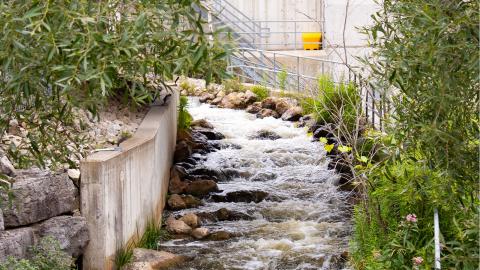 Fishing in The Blue Mountains

The Town is home to excellent fishing opportunities ranging from small streams and rivers to the expansive waters of Georgian Bay. Please review the frequently asked questions below to learn more about fishing in the Town. For more information on fishing regulations in Ontario, please contact the Ministry of Northern Development, Mines, Natural Resources and Forestry.